Home » US Coast Guard offloads more than $32.5 million of cocaine seized in the Caribbean 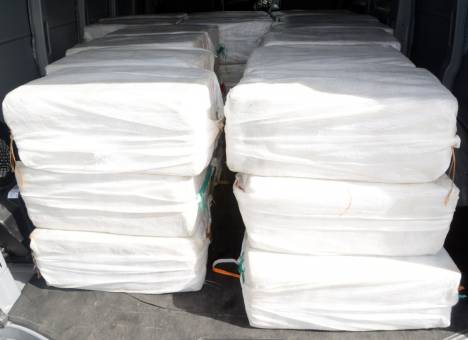 US Coast Guard offloads more than $32.5 million of cocaine seized in the Caribbean

SAN JUAN, Puerto Rico — The US Coast Guard on Friday offloaded approximately 1,100 kilograms of cocaine in San Juan, Puerto Rico, following a May 25 interdiction in international waters off the southern coast of Puerto Rico. The seized cocaine is estimated to have a wholesale value of approximately $32.5 million.

Three suspected smugglers, all Dominican Republic nationals, have been turned over to the US Department of Justice for prosecution by the US Attorney’s Office for the District of Puerto Rico.

The interdiction was the result of ongoing, multi-agency and international law enforcement efforts in support of Operation Unified Resolve and Operation Caribbean Guard.

During the afternoon of May 25, a suspicious go-fast vessel was detected by the crew of a maritime patrol aircraft, flying in support of Joint Interagency Task Force-South, in international waters off the southern coast of Puerto Rico. Coast Guard watchstanders at Sector San Juan diverted the Coast Guard Cutters Harriet Lane and Joseph Tezanos to interdict the suspect vessel. The crew of the Harriet Lane interdicted the go-fast, detained the three men onboard and seized multiple bales of suspected contraband, which tested positive for cocaine.

The contraband was placed in the custody of US Drug Enforcement Administration special agents in Puerto Rico for processing and disposition.

“As in many other cases, the success of this interdiction is due to the strong interagency cooperation between federal and regional law enforcement authorities in the Caribbean,” said Capt. Robert W. Warren, Coast Guard Sector San Juan commander. “We remain vigilant and stand ready to protect our citizens from illegal smuggling activities on the high seas.”

“Successful operations and seizures like this are a direct result from our response to the increase of cocaine production in South America and influx in flow through the Caribbean Vectors,” said Matthew Donahue, DEA’s Caribbean Division Special Agent in Charge. “Our collective efforts with the US Coast Guard, the United States Attorney’s Office (USAO) District of Puerto Rico, the Puerto Rico Police Department, and DEA’s foreign host nation counterparts continue, and these collaborative efforts lead to highly successful prosecutions around the world. The DEA, along with HSI, FBI, PRPD/FURA, USGG, and the USAO will continue to aggressively pursue these organizations to cause significant disruptions in their ability to profit, and to stem the flow of illegal narcotics into Puerto Rico and the United States.”