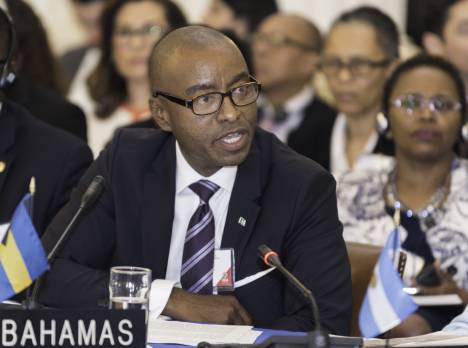 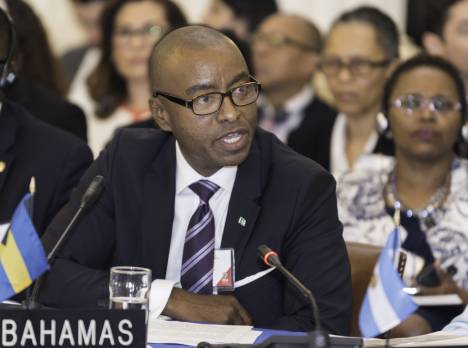 Bahamas Minister of Foreign Affairs, Darren Henfield, incoming chair of CARIOM’s Council for Foreign and Community Relations, speaking at the special ministerial consultation on Venezuela at OAS headquarters in Washington on Wednesday

WASHINGTON, USA — In a rare display of regional unity, the 14 independent member states of the Caribbean Community (CARCOM) effectively blocked the adoption of a declaration by the Organisation of American States (OAS) criticising the Venezuelan government.

Representatives of 33 out of the 34 member countries from the western hemisphere attended the specially called ‘consultation’ of foreign ministers on Wednesday at the OAS headquarters in Washington to discuss the ongoing crisis in Venezuela.

Venezuela did not attend and announced in April that it would withdraw from the regional body after a majority of its members had voted in favour of holding the meeting.

Canada, Mexico, Panama, Peru and the United States put forward a declaration calling for an immediate end to the violence, for political prisoners to be freed and respect for human rights and the rule of law.

The declaration also included a demand that the Venezuelan government shelve plans for the creation of a citizens’ assembly to rewrite the constitution.

US State Department Undersecretary for Political Affairs Thomas Shannon said the ultimate goal of the declaration was to “return to full respect for the rule of law, full respect for freedoms of political expression and participation” in Venezuela.

However, Nicaragua, a staunch ally of Venezuela, opposed the special meeting altogether, arguing that Venezuela was the victim of a “political lynching”. Representatives from Bolivia and Ecuador also rejected the meeting as an intervention in the internal affairs of the South American country.

On Wednesday, in advance of the ministerial consultation, Darren Henfield, newly elected minister of foreign affairs of The Bahamas, presided over a preparatory caucus meeting of CARICOM foreign ministers, as incoming chair of CARIOM’s Council for Foreign and Community Relations (COFCOR). The meeting served as an opportunity for dialogue and engagement amongst the CARICOM ministers.

Later, at the ministerial consultation, Henfield delivered a draft declaration on behalf of CARICOM member states, expressing the region’s concern about the challenges being faced by Venezuela, also stressing CARICOM’s commitment to the principles of non-intervention and non-interference, the need for all parties to hold constructive dialogue and the need for a peaceful outcome to the problems in Venezuela.

After further negotiations, CARICOM, in consultation with several OAS member states, determined that the most appropriate course of action was to suspend the session. Accordingly, CARICOM, through Henfield, as the incoming chair of COFCOR, made an intervention to have the session suspended, with a commitment to continue ongoing deliberations on the situation in Venezuela, with the objective of arriving at a consensus amongst OAS member states, prior to the upcoming 47th OAS General Assembly, in Cancun, Mexico, from 19th to 21st June 2017.

Since neither declaration was able to attract the required support of two-thirds of the OAS countries present, after five hours of discussion and no agreement, member states agreed to postpone the meeting to a later date in June.

The Venezuelan government celebrated the suspension as a victory against “interventionist countries” trying to meddle in Venezuelan affairs.

Caracas has repeatedly accused the OAS and its Secretary General Luis Almagro of promoting intervention and destabilization in Venezuela.